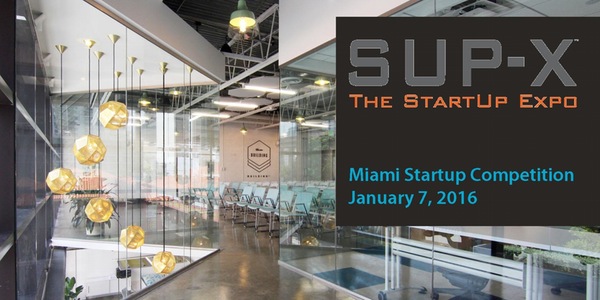 We kickoff SUP-X in Miami @ Building on January 7th in the first of 3 startup competitions in South Florida where winners receive a booth at SUP-X in February, and gain eligibility to be considered for the finals!

Startups Nominated by the Community!
One company will be nominated from each our of community partners: Rokk3r Labs, New World Angels, Miami Innovation Fund, Accelerated Growth Partners, the Enterprise Development Corporation of South Florida, Tamiami Angel Funds and more!

In addition to the community-nominated startups, one at-large startup may compete as well, as long as you meet the following requirements: less than $3mm in revenues, less than $3mm in capital raised; no restaurant concepts, real estate deals or real estate partnerships or project/infrastructure finance, and must be based in Miami-Dade County. Interested companies should email Bob Fitts.

Ticket price includes light food & refreshments. Come have a beer, root on your friends and kick off 2016 with SUP-X! Random drawing for SUP-X tickets, too!